For years, Denise's grandmother, Georgia, battled Alzheimer's Disease before passing away peacefully from a heart condition.  Despite Georgia's uplifted spirit, it became well evident the strain Alzheimer's can put on not only the individual, but his or her family and friends as well.  In an effort to spread awareness, raise money for the support and research, and provide support for those effected by it, Denise takes an active role in the fight against Alzheimer's disease. 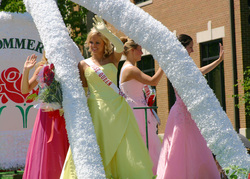 In 2006, Denise was crowned Miss Roselle.  She vowed from that day forward, to take participate in the support of Alzheimer's awareness.

It was during this time that Denise began planning a philanthropy event to raise money for the Alexian Brothers Mental Health Fund, specifically to support Alzheimer's research and care. 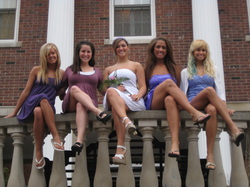 Upon relinquishing her title as Miss Roselle and freeing up additional time, Denise set forth in her efforts to put together a 3-on-3 Volleyball Tournament to benefit the Alexian Brothers Mental Health Fun under the name of Purple Roses Charity For Alzheimer's.

The color purple is used to represent Alzheimer's and the fight against it.  The word "Rose" was added because of the joy a single, simple rose may bring to an individual's life touched by the gracious act of giving.

Denise gathered up a team of her fellow Kappa Alpha Theta Sorority Sisters (pictured above) to assist in the preparation of the volleyball event.  Graciously sponsored by the Lake Park High School Women's Volleyball team and supported by a vast array of generous donors, Purple Roses exceeded their goals at the event. 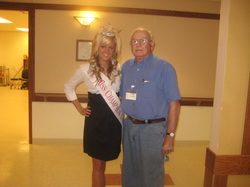 Awarded with the prestige title of Miss Champaign Urbana 2009 through the Miss America Organization, Denise spent a year serving her community and speaking of her platform, Alzheimer's Awareness.

One of the many ways she's participated in service was by volunteering at local nursing homes, assisting partially with those affected by Alzheimer's.

Denise continues to stay involved by participating in various events and fundraisers.  She has been active in the Alzheimer's Association through various walks to find a cure.

She hopes to generate awareness within the community and encourages others to support in the fight against Alzheimer's disease.